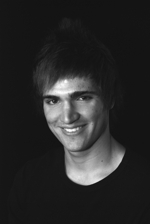 This is Jack's debut role with The Stirling Players and he is very excited to bring his character to life. Prior to One Flew Over The Cukoo's Nest he has perfomed for the Australian Acting Academy, Adelaide Fringe and has also spent 5 years in the Hills Youth Theatre which inspired him to dream of becoming a successful actor on screen and stage.

Jack has spent a long time on his character, sometimes summoning personal experiences to help with the more tricky scenes. He hopes you are blown away by how dark this play becomes.