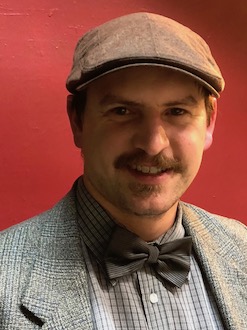 Joshua has appeared in myriad different roles with many companies, including several Theatre Guild Shakespeare Productions.

For The Stirling Players he has perfomed in Compleat Female Stage Beauty, Collaborators and The Beaux’ Stratagem, all of which were critical successes

He has had roles for the Adelaide Rep in Star Quality, Dracula and Cat on a Hot Tin Roof and played  MC for both Mystery of the Hansom Cab and Only an Orphan Girl;.

He has worked consistently for Red Phoenix performing in Titus Andronicus, Two Brothers, The White House Murder Case and most recently Caligula.

Joshua is also a dedicated member of Blue Sky Theatre, appearing in both Sense and Sensibility and The School for Scandal.