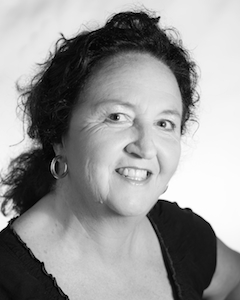 This is not Mo’s first foray on the stage with The Stirling Players but there has been rather a long time in-between!  In 2006 she played Stephanie in Daylight Saving, also directed by John Graham, but in the intervening years has been kept busy as production manager of The Stirling Players' Mr Bailey’s Minder, God of Carnage, The Lady in the Van, The Beaux’ Stratagem and now Our Country’s Good.  Mo relishes the chance of playing this 18th century, very naughty character who was clearly a “survivor. She just hopes that the name doesn’t stick  afterwards! When not at the theatre, Mo and husband, Nick, run a B&B and breed sheep on their idyllic Woodside property.