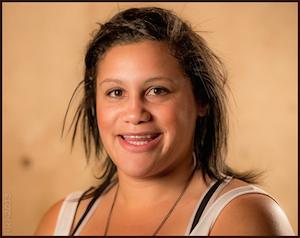 Nicolle Orr has always been interested in theatre and performing.  From high school plays she moved to Brisbane when she was 21 and studied performing arts at the Aboriginal Centre for Performing Arts where she was involved in various student productions, singing, dancing and acting. She studied drama at Flinders University where she did various productions as part of her assignments. Branching out, she had the chance to be involved with the Adelaide Theatre Guild’s 2014 production of Holy Day, in which where she played Linda. She is currently involved in creating and performing in Actnow - Forum Theatre's  - Responding to Racism, which has been received quite successfully.