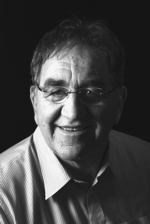 Stefan is a psychiatrist who’s had an interest in theatre most of his professional life, mainly in comedy in University reviews, at Sydney hospital and in the McMaster Hospital review, Canada.

His has also written, directed and acted in Monty Python-style comedy film sketches. He uses theatrical approaches in his therapy groups and finds theatre sports useful in creating change. Several years ago Stefan used work from Equus as the oldest ever auditionee to NIDA.

The role of Chief Bromden promises to be both challenging and engaging for him, both as an actor and as a professional in the psychiatric field.