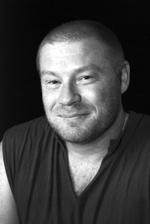 Steve Parker began acting in 2004 and hasn't looked back.

He has played major roles in many productions out of Unseen Theatre Company (adelaide critics award - best actor in a comedy 2004 - nominated for Coopers award 2005), Tea Tree players, The Adelaide University Theatre Guild and is thrilled to be part of this production with Stirling Players. His major focus is comedy but is thoroughly enjoying sinking his teeth into this dramatic role.

He is currently writing a sitcom with James Whitrow and hosting a weekly internet radio show on Rant Radio.