Situated in the heart of the Adelaide Hills, the historic Stirling Community Theatre, dates back to 1884.

In July 1882, a public meeting moved that "it is desirable that an institute be erected conveniently situated for the present and prospective population of the neighbourhood" . The quoted price for the work was £700.

George Brown, owner of the land all round, councillor, gardener, builder, carter, lodgeman and local justice, made the land at Lot 3 Avenue Road available at the give away price of £150.

On 18 May 1883 a commendable crowd of locals met in the Lodge Room at the Halfway House to consider an institute suitable to Stirling's needs. Upon raising an initial £100, the committee elected for the purpose were authorised to proceed with the construction.

On 20 October 1883 the chairman of the new District Council of Stirling, Dr. Edward Stirling (later Sir Edward), laid the foundation stone of the hall. In laying the stone he told the gathering that the building was being built “for the purpose of providing means of healthful recreation for the minds of the residents of Stirling West”.

On 18 January 1884, the modest rectangular building, not yet completed, was opened with a garden affair at Mr. Edwards large Aldgate flower garden. 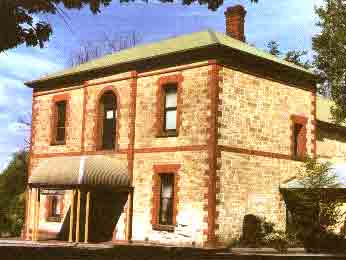 On Saturday 8 May 1884 a musical and literary evening was held in the Institute Hall, marking its commencement as a theatre venue although sporadic until 1972. The ground floor front two rooms were added in 1885 and by 1898 the building was complete. The stage area was added and two rooms upstairs. The room on the left as one entered the front door was the Stirling Council Office and the room to the right was the Stirling Library. The two upstairs rooms were also used by the Council the larger of the rooms was used for meetings – Council, Lodge on
Friday nights and Anglican Church services on Sundays.

The shelter with curved iron roof at the front of the building is a comparatively recent addition by Council (1980s). It is surely very much out of character with the rest of the building as viewed from the road and its erection was vehemently opposed by members of the committee at the time.

The auditorium was a social gathering place for the locals. Silent movies were accompanied by Mrs. Hart playing appropriate mood music on
the piano. After these films had finished and also after the early “talkies” had finished, the seats would be relocated around the hall and a dance would be held.

Balls were also held with the Stirling Hospital Ball being an annual event.As more people became car owners they could go further afield for
their entertainment and amusement. This along with the coming of television resulted in less and less patrons attending the various functions held in the theatre.

In 1934 a new Bio-Box or Lighting/technical box was built due to the demand of movies and the safety of the projectionists. In 1962 the Institute Library closed and the Centre (movies) finally closed in 1978, making way for amateur theatre which had been drawing larger audiences than the pictures. Demolition became the option but in 1972 steps were taken to inject new life into the building.>This paved the way for the Players (later the Stirling Players), Hills Musical Company and the Hills Youth Theatre.

In 1972 the two resident groups were the Stirling Players and the Hills Musical Company. Facilities were to say the least, primitive by today’s standards. There was no heating in the theatre, no dressing rooms, no toilets and no orchestra pit. Seating was traditional country hall type of groups of three fold-up wooden chairs, arranged in rows on the flat wooden floor. These were soon replaced by what seemed at the time, luxurious padded seats.

The current seats were purchased from the theatre at the Marion Shopping Centre when it closed down. As the reputation of the two companies grew, audience numbers increased and seasons were lengthened. All profits were returned to the theatre via the management committee. Gradually facilities were improved and upgraded.

An apron was added to the front of the stage. The orchestra pit was dug – orchestras for early productions simply sat in front of the stage in the auditorium separated from the audience by a hastily erected black curtain.Lighting for the first few productions was controlled from the stage wings and this was moved into the projection box (Bio-box) above the doors to the auditorium.

Lack of dressing rooms was a major problem for the casts of the early productions. Firstly, wings space was used but this was crowded and dark. A few shows had the cast dressing room in the space under the stage. Problems here were two-fold; tall people could not stand upright and after rain the floor was under water. Next the green shed behind the theatre was used as changing rooms. These unlined tin sheds were very cold in winter. The next area to be used as dressing rooms was the upstairs room – the room where before the building of the Council Chambers opposite the Post Office, the Stirling Council had held its meetings. This room is now mainly used for ballet classes.

The other major problem for both cast members and audience was the lack of toilet facilities. Fortunately as profits accumulated it became possible to add dressing room facilities and toilets. The foyer area was opened up and carpet was laid in the foyer and auditorium. Efficient gas heating made the auditorium a much more comfortable area during winter and the addition of reverse cycle air-conditioning allows cooling and comfort during the hot summer days.

The Dyster Room was added to allow the storage of properties and sets during a production much easier than was the case previously. It also allowed access to the stage without having to go outside, a blessed relief during winter performances!