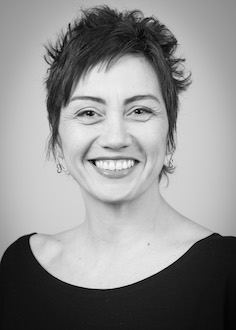 Not only is this Andrea’s first performance with The Stirling Players, The Clean House is also her Australian debut. Andrea is a published writer and producer who moved from Brazil to Adelaide with her husband in 2007. With an extensive career behind the scenes in the entertainment industry, she has always had a passion for acting, performing in a number of school productions and a soap opera directed by the Brazilian TV director Roberto Talma, her greatest mentor.

When Andrea heard about the audition for Matilde’s character – a Brazilian living overseas – she grabbed the opportunity without hesitation. Now, it’s a great honour for her to be part of the cast of The Clean House. ‘Besides, being back on stage proves that the butterflies never stop flying in your stomach,’ she says.

Passionate about animals, the environment and writing, Andrea has also written a few short stories and short film screenplays. At the moment, she is writing her second fiction novel.