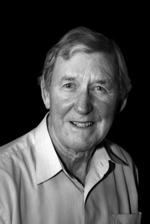 Peter cut his stage teeth as Rev. Hale in The Crucible under the stern eye of Bruno Knez at La Mama. This was followed by Theo in the world premiere of There's One in Every Unit. Then came three classical roles: Cardinal Wolsey in A Man for All Seasons (Adelaide Rep), Ben in Death of a Salesman and Frank Strang in Equus (both with Gilles Theatre Company. These were followed by three roles in Red Noses (AUTG). More recent roles have been as Witness 8 in The Investigation (Mayfair), Dr Weeden in Beyond Reasonable Doubt,  Wal in Hotel Sorrento, and Aide Turkle in One Flew Over the Cuckoo's Nest, (all with The Stirling Players).