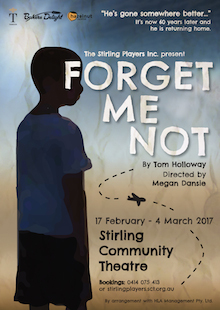 The Stirling Players opened their 2017 season with the powerful Australian drama, FORGET ME NOT, by Tom Holloway. Multi award-winning director, Megan Dansie, directed this SA premiere, first produced by the Belvoir Theatre in Sydney in 2013.

Between 1945 and 1968, thousands of children were shipped to Australia from England, many believing they were orphans, and all with the promise of an abundance of "oranges and sunshine". The reality was far from this. FORGET ME NOT concentrates on one of these children, Gerry, a Victorian farm worker. Holloway’s brilliant leap of imagination has been to set this story, not at its outset, half a century ago, but here and now. At almost 60, Gerry is struggling to come to terms with his past, and his daughter, Sally, has had it up to here with him and his problems. All Gerry knows is that his mother lives somewhere in the UK, Liverpool, according to the records. So he is going there to meet her for the first time since he was three, to find out what made him who he is.

Holloway has written a series of raw, often achingly beautiful conversations between members of a scattered family. Drawing it all together is Gerry’s extraordinary, precarious bid to finally learn what it means to love and belong to a family.

Accolades for FORGET ME NOT

The Stirling Players' and lead actor, Tony Busch,  received nominations for the Theatre Association of SA 2017 DRAMATICal and Best Male Actor Awards for 2017 announced 12 February, 2018. View the list of nominees...