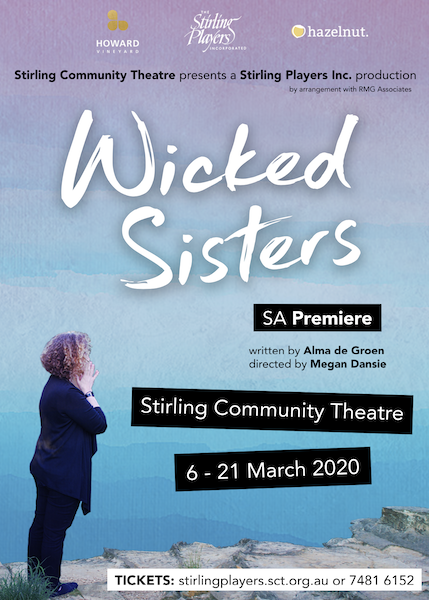 WICKED SISTERS is set in the present, in the Blue Mountains in N.S.W. This Australian play by Alma De Groen was shortlisted for the 2003 NSW Premier's Literary Award and takes place over one evening.

A humorous and acutely observed story of the friendship between four middle-aged women, refracted through their relationship to the late husband (Alec, a renowned intellectual and scientific genius) of one of them, Meridee. The once-university pals meet in the Blue Mountains at the house of Meridee after Alec's death. As the evening progresses, long buried secrets surface and events take a somewhat wicked turn. De Groen's black comedy begins with laughs as the wine flows, but becomes an increasingly tense and convoluted piece that is given an absorbing workout as long -buried secrets are revealed and moralities of various kinds are questioned.

Petra Schulenberg as Meridee: Uptight, still apparently grieving the death of Alec, her darker secret is revealed during the play

April Stuart as Judith: unruffled, well-groomed publicist who has made deceitfulness an art, ducking for cover from the truth. She regards men her age as Neanderthals.

Tracey Corsten as Hester: a clever, aging hippie type who seems to have led a feckless life of activism with not much to show for it since being Alec's student. She is the sardonic outsider to the group. Hester believes that there's a moral universe, not a moral vacuum, and that's what she acts upon.

WHAT THE CRITICS SAID ABOUT WICKED SISTERS!

"Petra Schulenburg... deliver(s) a powerhouse performance as Meridee. She commands the stage at all times, and her final climactic moments are a masterclass in authentic character work."

"April Stuart as Judith... soars in the second act"

"Tracey Korsten as Hester is excellent"

"Deborah Walsh as Lydia...shines when Lydia’s deeper sadness is explored"

"Go and see this authentic, realistic and believable drama..."