1789. Sydney Cove. Supplies and morale are low. Governor Arthur Philip and some of his officers debate the purpose of imprisonment and the nature of criminals. When someone mentions that the convicts consider hanging to be "entertainment," Philip wonders if they could be offered something more civilised. Could they stage a play, perhaps? It would be good for them and for the colony, as a whole.

Ambitious young 2nd Lieutenant Ralph Clark, longing for his old life in London, offers to direct George Farquhar's comedy, The Recruiting Officer - in the face of opposition from his fellow officers, only two copies of the text, a cast of illiterate convicts, and one leading lady who may be about to be hanged.

With almost every character based on a real member of the First Fleet,  Our Country's Good is a moving, and surprisingly funny, play about the possibility of redemption and the transforming powers of theatre.

Winner of both Olivier Awards and The New York Critics' Circle Awards for its West End and Broadway productions, and revived last year to rave reviews by the National Theatre in London, this is the true story of Australia's first theatrical production.

“Bursting with humanity, humour, heartache and passion”
The Telegraph, London, 2015

"A profoundly humane piece of theatre,
steeped in suffering yet charged with hope"
The National Theatre, London, 2015 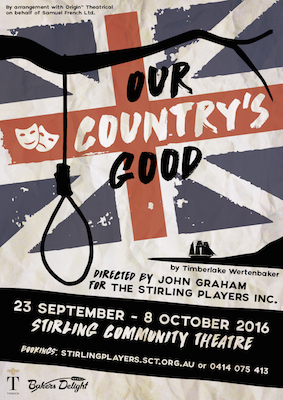